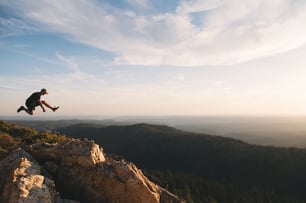 With the weather is still on our side, we’re savoring the final stretches of outdoor exercise like running and biking outside without toppling into mounts of snow or coming home nearly frostbitten. Before the weather takes a turn, we decided to debunk the bogus myths of outdoor exercise, according to Hirofumi Tanaka, Ph.D., director of University of Texas’s Exercise Science program.

You Can Prevent Injuries by Stretching

Tanaka emphasizes that stretching before a workout to prevent injuries is one of the largest, most believed myths to date. Theoretically, stretching tendons before a run may seem like a logical start to your fitness routine, but studies actually show that it doesn’t have such a positive effect. In fact, the American Academy of Orthopedic Surgeons (AAOS) found stretching before a run has no impact on potential injuries. Moreover, a study conducted by military recruits doing intense outdoor training programs had quite similar results.

The director even warns that some athletes should avoid stretching before games for performance reasons. Because tendons are like springs, the more you stretch the spring, the more jump height and sprinting activity goes down, which can be detrimental. Instead, warm up by doing cardio such as a slow jog or brisk walk.

It’s Better to Run on a Soft Surface

You may have heard running enthusiasts advocate running on soft surfaces, as softer surfaces are better for joints. In actuality, Tanaka says there is no evidence for that. In addition, he warns against softer surfaces as they tend to be more irregular than pavement and may lead to twisted ankles or other typical running injuries.

“The energy expenditure is usually pretty similar because you are doing the same amount of work,” says Tanaka, therefore you should think again if you choose to run in 60-degree weather as opposed to in the midst of a heatwave. Unless you’re exercising prolonged periods of time, for 45 or 60 mins, you might increase sweat and climb your heart rate, only burning 5 to 10% more calories, or in other words – slightly more. Exercising in extreme heat can be dangerous, and athletes should be cautious.

This is dependent on the type of exercise you’re doing. If you’re a fan of long-distance endurance events during the summertime heat, you’re going to need to add more to your h20 intake other than just water. During high endurance workouts, you’re losing salt and electrolytes from all the sweat, this could lead to having your cells swell. To avoid this during a rigorous workout, drink salts and electrolytes such as Gatorade to stay fully hydrated.

The most important key to getting the most out of your outdoors exercise is getting started! Building good habits and knowing the facts will help you build a healthy and exciting workout plan. When you’re exercising outdoors be sure to bring your affordable sunglasses with you, and take a minute to enjoy the scenery!

This article was originally seen on Women's Health Magazine.

Topics: For Your Health