I Wonder If All Aviators Wear Sunglasses?

There is one style of sunglasses that stands far above the rest. Aviator sunglasses have made a lasting impression on American lives that no other design of shade has yet to do. It has been immortalized in our culture. The aviator has witnessed some of the happiest and heaviest moments in our country’s history. They have been around since the mid 1930’s, and it looks like they will be sticking around for some time to come. So if you don’t have a pair yet, you should probably invest in one soon. Luckily, these days, there are some alternatives to buying name brand. The aviator style has been modified and replicated and adopted by so many manufacturers that you are no longer forced to spend a couple hundred of dollars on a pair. These days you can find quality pairs for only ten or twenty dollars. So if you have the choice of spending an arm and a leg or only spending a few bucks, why break the bank?

Aviator sunglasses were initially developed by Ray-Ban to protect American pilot’s eyes during World War II, hence the name. When newspaper photographers snapped legendary photos of General Douglass MacArthur when his army landed in the Philippines, they became a part of our history. Aviators immediately began to catch on all over the place. The style even crossed nationalities because it was soon adopted by the French Army. Luckily, the craze didn’t remain with only the military. It began to creep into other aspects of American life.

Twenty-five years later, the style had become popular with musicians. Beatles members Paul McCartney and Ringo Starr were among some of the early popular culture icons to rock the style. Freddie Mercury, the lead singer of the band Queen, was another early supporter. And like any other style that is actively support by the musical elite, it catches on with the rest of society, but nothing highlighted the American acceptance of this style like the smash hit movie Top Gun.

Pretty much everyone alive from 1986 to 1990 saw Top Gun at least once. It was immediately an American classic. In the middle of the Cold War, we made a movie about the aircraft supremacy we had over our opponents. The Ruskies were the bad guys. America was the good guy. It was a great time to be an American in history. And throughout the whole movie is Tom Cruise rocking aviators like no one has ever seen. Even though they were developed for pilots fifty years previous, it was if they were designed for Tom Cruise himself. The style was immediately reborn, and it has been thriving ever since. 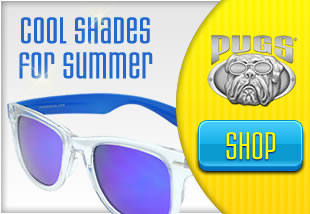 Aviator sunglasses were a cultural mainstay of the hippy movement, almost as classic as the John Lennon circular lenses. They have come to represent a way of life or a state of mind. They represent acceptance and a rebellion to the traditional American values of the 1950’s. They say that you don’t all have to be the same to get along. You can wear what you want. You can be what you want. You can do what you want. No longer are you forced to wear the traditional styles, you can have the same comforts as a WWII pilot in the South Pacific. Lucky you…

Aviators are so great because the design is almost perfect. The lenses are nice and large which is important for optimal sun blockage. Personally, I have found this to be particularly helpful after long nights of partying. The sun can be extra bright those next mornings, so it is important for me to be able to hide my eyes effectively. The frame is thing, and the lenses are big. That is how I like my chilling sunglasses, and nothing says relaxing like rocking aviators.

It is amazing how wearing aviators carries the same message today as they did in the 60’s. I wear them to shows because they are still the perfect sunglasses: they look great; people know I am ready to party; they protect my eyes from all the stage lights; and my Pugs aviator sunglasses are cheap enough that I won’t be too upset if I lose them. The freedom to lose or break them because they aren’t expensive is perfectly in line with the hippy mentality. Possessions can come and go, but the experience, and the memories, and the people you meet along the way, those are the important things. Focus on what is important in life, and leave your aviator sunglasses needs to Pugs.