How to Protect Yourself in Bear Country 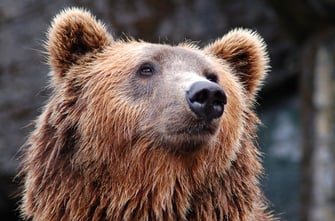 I’m what most call a city dweller, but every so often I do kick on my hiking boots to explore nature around me when the loud New York City streets become overwhelmingly loud, crowded, and this time of year, hot. Around this time last year, my friends and I packed into a car and drove to Upstate New York to go for a hike, “Will there be bears?” Shelly asked as we parked the car. I assured her “Of course not.” I’ve done this trail countless times, and haven’t crossed path with any furry creature, bear or bunny included. Of course, as if it was planned, the second we stepped out of our car and walked at least 100ft from the lot towards the trail a woman came up to us and said “be careful, I was on a run here when I ran past a family of bears.” Sure enough, we saw from a distance a large, assuming Mama Bear and her two (still shockingly large) cubs. To kill some time, we wandered into forest lodge and watched the bears until there was a safe distance between us, and we proceeded on our route.

But the rest of the trail had an ominous reminder in the back of our minds, how do we proceed if we do come across another bear? We did our research so we would all learn how to protect yourself in bear country.

If You Know Dogs, You Know Bears

If you know a guard dog’s behaviors, you can identify similar behaviors on a bear. If it has its’ ears perked and eyes bright- it’s likely just curious (don’t approach it regardless), but if it has its head bowed and ears pinned, the bear is territorial. If it’s stalking you, then it’s predatory.

Put an electric fence around your tent. If the bear bites the fence, which it likely will out of , then the voltage will shock the bear and keep it away from your camp grounds. Common camping practices such as keeping food far away from your tent still apply.

Bears are likely to retreat if they’re outnumbered, even if it’s predatory. They might take a while, but they might be intimidated. As a group, slowly back away from a problem bear.

Keep Spray with You

Bear spray can do wonders if a bear approaches you. It's said that usually, teenage bears approach you, likely because they’re curious- and that’s when sprays usually get used. Spray the bear spray in a Z direction, which the bear will run into. Be aware that the wind can carry the spray to the side or over at you.

Next time you camp in the wilderness, be sure to protect your eyes with affordable sunglasses, and other electronic accessories which you may need on your trip!